Why are you so far away from me 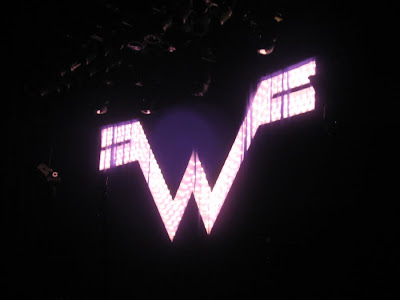 This is going to be a long post because I have so much to say, but it won't be as long as I'd like it to be because I won't say everything I want to. Where do I start. This is Weezer's first big show in Los Angeles in what seems like years. I'm not counting the Forum or Long Beach or secret shows as official LA shows. The last time I saw Weezer was 4 years ago at the Long Beach Arena when Hot Hot Heat opened and Foo Fighters co-headlined with the band. I went for two consecutive nights in that massive floor section. The first day, the guard in the front had to take scoop me out after Weezer's set because I was drenched in sweat, shivering, and was suffering from being crushed on all sides, I then proceeded to walk away towards the side and collapsed on the floor.

Well, fast-forward 4 years, it's October 24, 2009 and Weezer plays the Hollywood Palladium. How excited I was! Over a year ago, randomly, I bought glow bracelets at a craft store and said to myself, "These are for the next time I go to a Weezer show." And it came true. I was front row, but way to the side, with no complaints. Especially since Rivers came all the way over to our side several times. And now I finally have photographs of Weezer to add to my rock photography library. So happy. They opened with "Hash Pipe". The flow of the show was great. You could tell that the band really enjoyed playing for us, too. Of course, the show was sold out and the fans were very happy. I freaked out when they played my favorite "Why Bother" from Pinkerton, I danced so hard that one of my glow bracelets flew off. Funny. They sang "Photograph", I freaked out again, and then they went into a cover of "Song 2". I just truly had a really good time and felt so happy. There was a moment during "Island in the Sun" where I kind of teared up and felt this weird bittersweetness. That song is special to me. Weezer is special to me. Their music was a big part in helping me get through the early stage of my dog eat dog world cut throat industry career. Anyways, back to the show. Sara Bareilles made an appearance to duet during "If You Want Me To", and I, in all honesty, was kind of annoyed. Maybe it was jealousy or what not, but I didn't like it. I like the song, though. Chamillionaire came out during the new track "Can't Stop Partying", and surprisingly added a nice touch to the song. Okay, but here goes. The thing is, if you are like me and you listen to Weezer and indie rock, you have no idea who Sara Bareilles and Chamillionaire are. I think most of the people around me were the same way. We were slightly confused and didn't know who they were. I mean, I know their songs because of mainstream airplay, but I don't know their names or faces. Weezer's encore set consisted of the Kids/Poker Face medley. When they started playing "Buddy Holly" and I realized it was the last song of the night, and how special and magical everything was, I literally got goosebumps. Seriously, I had the best time and I've been to many rock shows but only a band like Weezer can make me feel this way. It was definitely an epic show I will remember for a long time.
Weezer's new album "Raditude" to be released this Tuesday November 3, 2009. 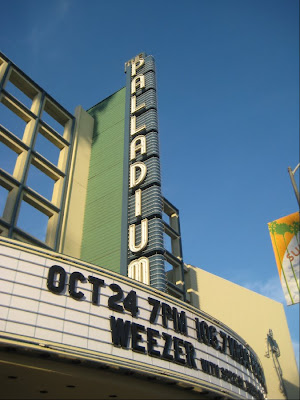 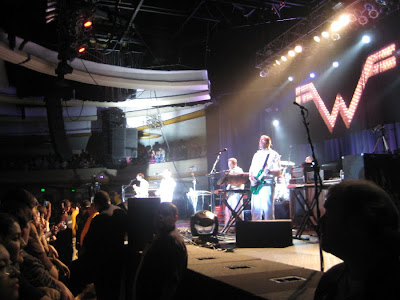 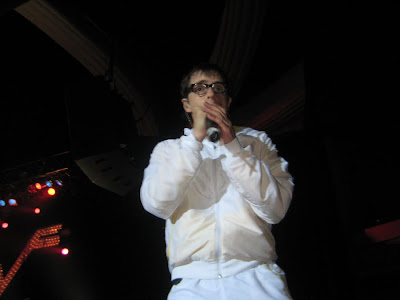 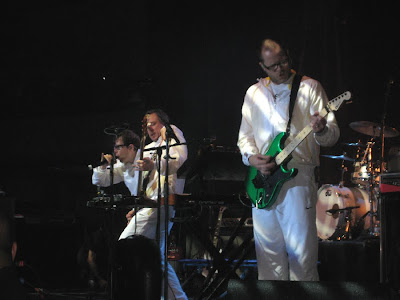 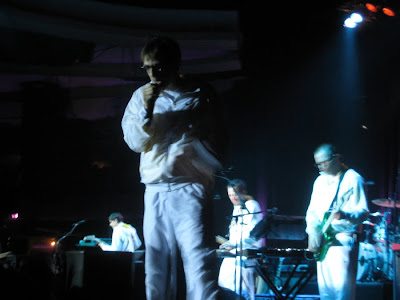 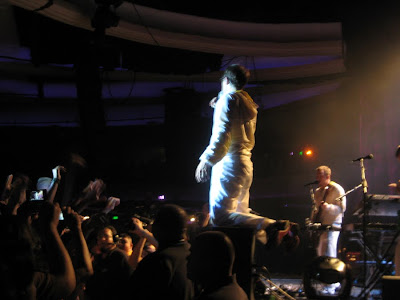 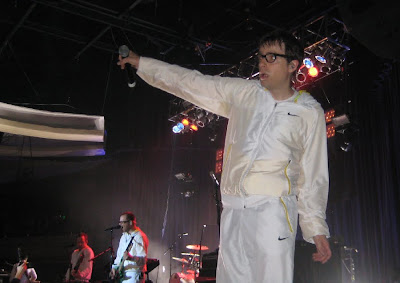 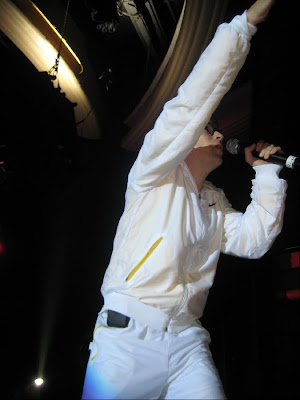 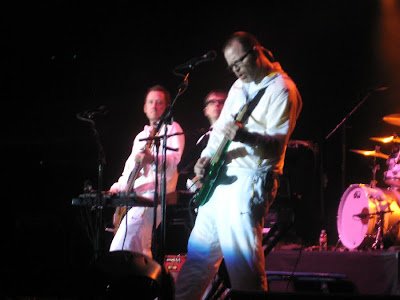 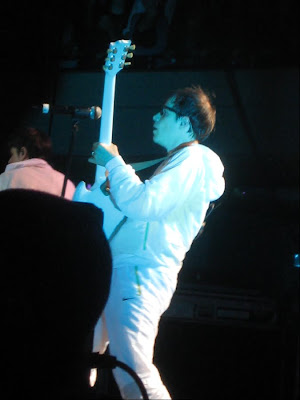 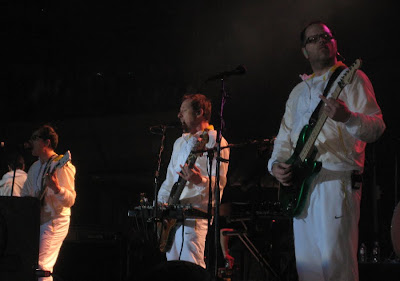 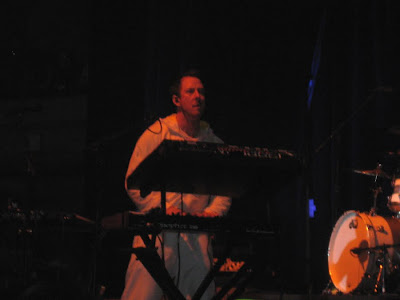 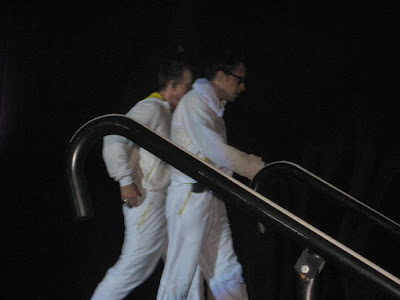 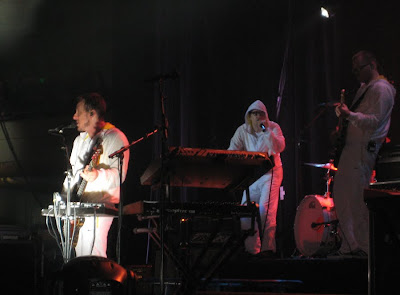 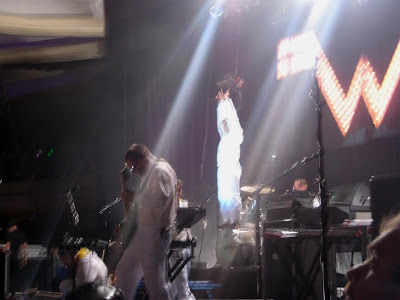 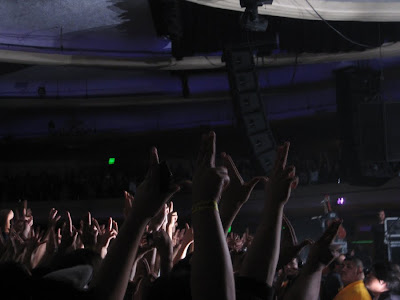 We saw Butch Walker on our way out. I love his work. Such a cool guy. 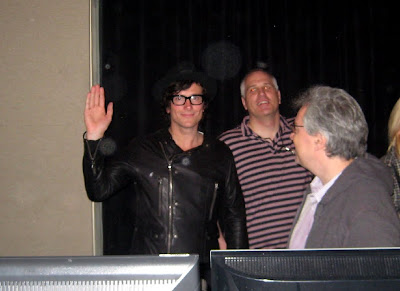 A beautiful perfect night in Hollywood. 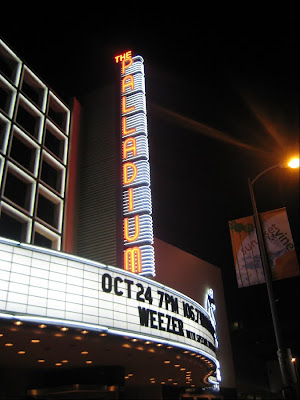 Posted by Youngest Indie at 8:49 AM